Well. I made it to the DYLAN show on Monday. I left the house just after 4pm and hit the Rib-eye for dinner with James. I had a sandwich with salad, chowder, and coffee. I was able to hit the free-way just shortly after five pm.

I made it to Seattle about 45 minutes before show time. This was good because I drove some ten blocks out of my way, and had to retrace my footsteps. I found a place to park only 2 blocks from the show. They charged a flat $2 per hour, and I had to fork out $10 at the end of the evening. It was called “The Meridian”, a hotel with a pay parking garage. I was okay with it.

This was a sold out show! I got my tickets early because it was on a Monday and did not interfere with My work schedule as an all Pro Disc Jockey! I passed people looking for tickets, and others selling. It was a short walk so I ignored all advances with a smile. I did stop and buy a black Bob Dylan  T-shirt from a scalper, for only $15. It was half off from the originals inside. Normally I never buy shirts, but when you get a 50% discount then it is okay to break the norm! 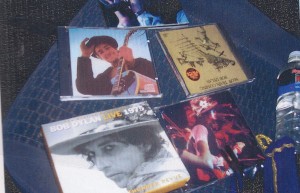 (this is a collection of killer Dylan Music I listened to on the way)!

I got inside al-right. I got my ticket only 5 days before show time on some internet site I had contacted when I discovered the show had sold out in only an hour. I paid $85 for a ticket worth $67 plus fees. I think I only had to pay about $8 more than the guy sitting next to me who said he was 10th in line at ticket-master when they first went on sale! Not bad! Scalpers online were asking an average $275 each with a minimum of 2 tickets purchased. Tee cheapest I found online was about $169, again in pairs so that was well over $300 clams! Rip Off! 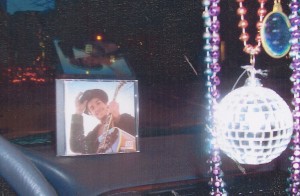 The show started right on time at 7pm. The first of three acts was upcoming newcomer “Amos Lee”, who had just released his first record one week earlier. I gotta say that he was pretty good! He played a big Gibson acoustic J200. one of my dream guitars. I liked his music a lot but not enough to buy his cd! Maybe a burned copy or download somewhere down the road! 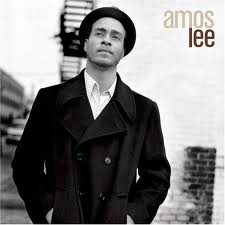 After a 15 minute break “Merle Haggard” hit the stage, I have seen Merle before, and am a HUGE fan of his. When it comes to country music and song-writing he is tops with me. An interesting choice that Dylan made for this cross country tour. Merle voice was clear and clean. The band was about an 8 piece all pro Nashville sounding sweet group. They had an opening theme they played and Merle finally made an appearance stage right, and walked on waving and smiling before taking his Fender trademark telecaster and strapping on for the opening song “I think I’ll Just Stay Here and Drink”. Followed by two more classics “Silver Wings” and my personal favourite “That’s the Way Love Goes”, which we used to perform live in past band I played with.

Merle was in tune, and had great mike control. Quite laid back, that is for sure. He made some jokes about Martha Stewart and sang a verse of an impromptu tune he said he was writing with Bob  Dylan. Next he did a Bob Wills classic fiddle tune, and he played the fiddle! Impressive. He started to do “Oakie from Muskokee” as well as a classic waltz that I love, but he stopped after about a half verse of each and complained about his voice not being loud enough in the monitor. “We’re an old beer and hanky-tonk band” he said. “This is way out of our league. I should be at home being lazy!”. Then he played “mama Tried” and “White Line Fever”. All in all he was only on stage about 50 to 55 minutes. He sounded great but I did not like the choppiness of his set. Stopping and starting all the time. At least he talked to the audience! That is something Bob failed to do. 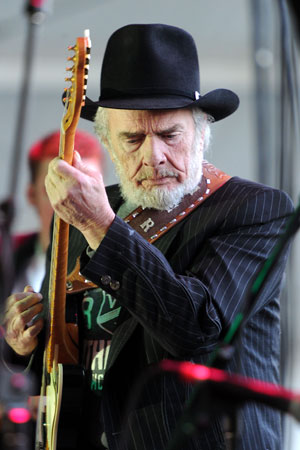 About a 30 minute break this time. I went out and bought 2 cardboard posters, a metal Dylan pin, a Haggard 8 x 10 glossy, and a HAG Key chain. I dropped about $47 bucks plus the t-shirt early on. I also got some free Dylan postcards. I returned just in time for curtain call. 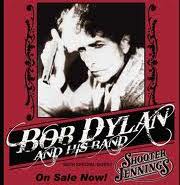 Bob Dylan hit the stage at 9:10pm. He was dressed in a dapper black suit with beads on the trousers and vest, and a classic rock star hat. He spoke not a word to the crowd, and never introduced his band. The first 2 songs I did not really recognize. The third one was “Stuck inside a mobile with the Memphis Blues Again”, which was barely recognizable. The melody was way off and he was dreadfully out of tune vocally for most of the night. It took about a half of each song to figure out what it was. Bob never picked up a guitar the whole night! He stayed right behind an electric piano, and only came out to sing in front of the band about twice. I was told he had arthritis or something and can no longer play which is sad. He was humped over his keyboard singing all night into a microphone that was way too low.  I kept wondering why he did not raise the boom stand by about a half a foot! 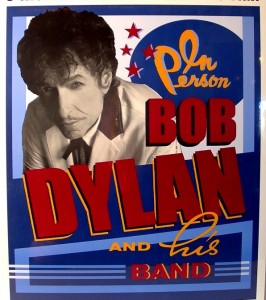 He played a couple of songs from his last studio cd, “love and Theft”, but he got the best audience response of the night when he played “Mr. Tambourine Man” and took about a two minute solo on the harmonica right out in front of the band where everyone could plainly see him! His version of the song was nothing at all like the studio track. It was, well lets say completely different. He also played “Watching the River Flow”. I was disappointed he did not play anything from my favourite records, “blood on The Tracks” or “Desire”. No religious stuff, or classics faves of mine that I have seen him do in the past. Most of these require an acoustic guitar though. (such as “I shall  be Released”, or “Knockin’ on heavens door”, and “Forever Young”). Not tonight! 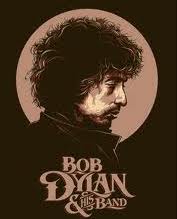 It took us a good ten minutes maybe to get him to come back for an encore. As suspected it was “Like a Rolling Stone”, but a muddled and dishevelled version of it to say the least. It not sound right to me anyway. I guess I listen to his albums way too much!

He also performed “All Along The Watch Tower” but it was basically unrecognisable for a lot of it. The curtain went up and I was sure the show was over and started to leave. I got almost to the door and realized he was playing another song. This time I walked right down to the front of the stage, about 20 feet from him standing there hunched over his piano. This was the highlight of the show for me. He sang a Merle Haggard cover, one of my favourites “Sing Me Back Home”. I thought it was pretty cool. He obviously admires Merle’s song-writing, as do I,  and this was a shocker choice that even the vendor selling Merle merchandise did not expect. I could see the balcony from up front there, and everyone seemed to be standing and making appreciative noises at this sold out show. 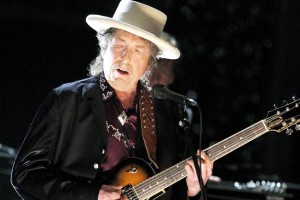 All in all I am glad I went. There is something about being in the same room with Bob Dylan that is comforting. The sound of his live music is another story. This was my 7th show of his. and although I was not blown away by his reclusive style, somehow I believe that I will see an 8th show of his live, if he does not retire any time soon, which I personally believe would be a good idea! His song-writing is unmatched, a true genius. As a live performer though, his work needs a lot of help!

This is just my opinion. Not gospel. The show was what
it was, and yes, I did enjoy it. 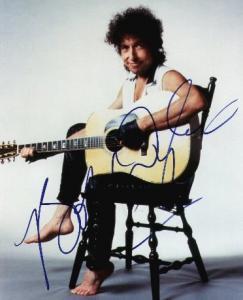