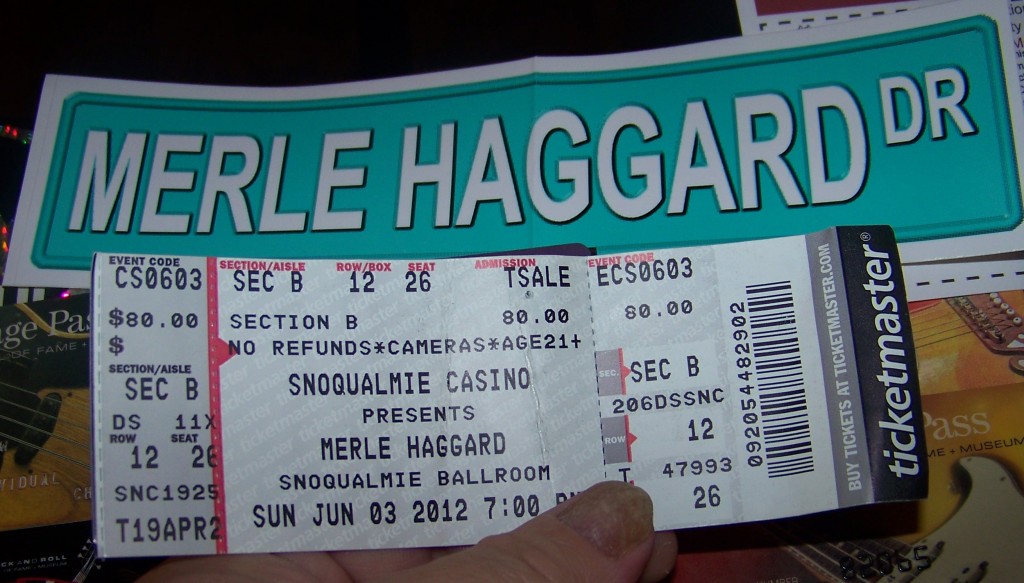 I always love to see Merle Haggard Live! Today was no exception! This was My first trip to The Snoqualme Casino. My friend Robert Small  decided to ride a long and keep me company. So I left Olympia at 4:45. (Note to self. Next time I split for Snoqualme leave @ 4pm instead)!  It was a long 67 mile haul and I missed the exit and wasted a lot of time back tracking and asking directions. But in the end I had about 15 minutes to spare and never missed a single song! It was an adventure, so I would have it no other way!

(Here is the Casino in Snoqualme…. Here we come Hag)!
I stopped and sprung for a $30 black Concert T-shirt and a small sticker that says “Merle Haggard Drive”. Hustled in side to catch the Opening Act, Merle Lee Haggard Jr. sang about 4 songs. He is Merle’s oldest son. He used the same all pro Nashville band that His Dad uses “The Strangers”. This was the last concert of this “Tennessee Tour”. Merle’s band,  had His Youngest son on Lead Guitar, His daughter and His wife on back up vocals. It was a family affair. They had altogether a drummer, bass player, Fiddle Player, Hot piano Player, acoustic guitarist, Two Family  singers think I counted an 8 pieces all together. His young Son on Lead Guitar, and Merle Himself.  This band has won “Best Touring Band”  from The Academy of Country Music for 9 years in a row! 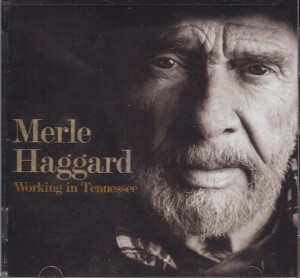 I was wondering what he would open with, and what songs he would play. I found out soon enough. Unfortunately  there was Huge Giant Man already about 6 foot 5, with a black Stetson hat that made him well over 7 feet tall sitting right in front of Me! I had to sort of cock my neck and peer around that Dude all damn night! Oh well, Merle still was fantastic, and how could He not be? Here is the set. I wrote them all down on my ticket envelope! 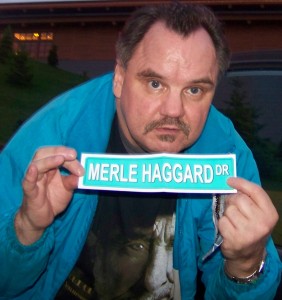 (I am wearing My cool concert T-shirt and showing my sticker)! 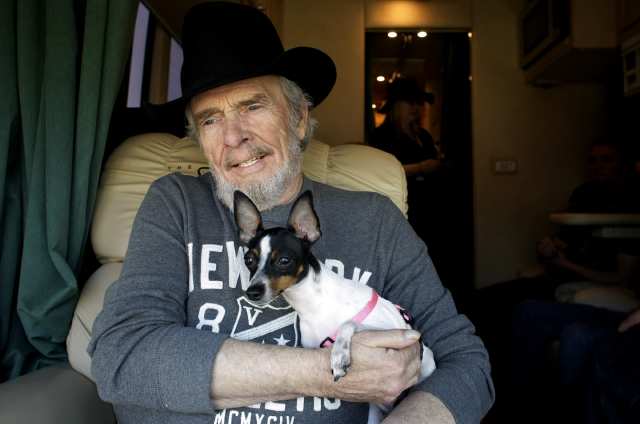 (Here is Merle and Friend,  on a recent stop from this very tour)!

SET LIST:  Live @ The “Snoqualme Casino” 06-03-2012
Merle’s Opener: “Ramblin’ Fever”
Mama Tried
White Lightening
Silver Wings
I think I’ll Just stay Here and Drink
Are The Good times Really over for Good?
Rainbow Stew
If I could Only Fly
Big City (Fiddle tune)
Sing My Back Home (For all Ex-Cons)
Pancho and Lefty
I wish I was 30 Again
Tonight The Bottle Let Me Down
Fighting Side of Me (For Military Personnel)
Today I Started Loving You Again
Working in Tennessee (Title song to the new record)
Twinkle Twinkle Lucky Star
Oakie From Muskokee (Written for His dad of Oklahoma)

(They gave Him His Own street! Local Boy Made Good)!
Merle famously never gives any encores.  The show was a short Hour and 15 minutes of Merle. Total Hour and and Half!  But here is the evidence that he does no curtain call, These are the lyrics to the great song Footlights, but He did not sing it tonight. He did last October when He played in Selton though.  It was a lot better than this show, because it was closer and it had Kris Kristofferson in the band! 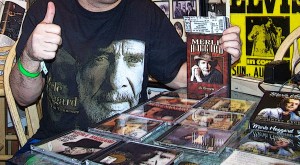 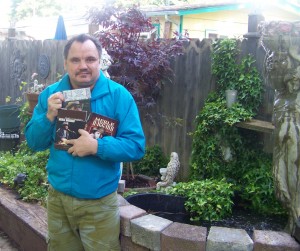 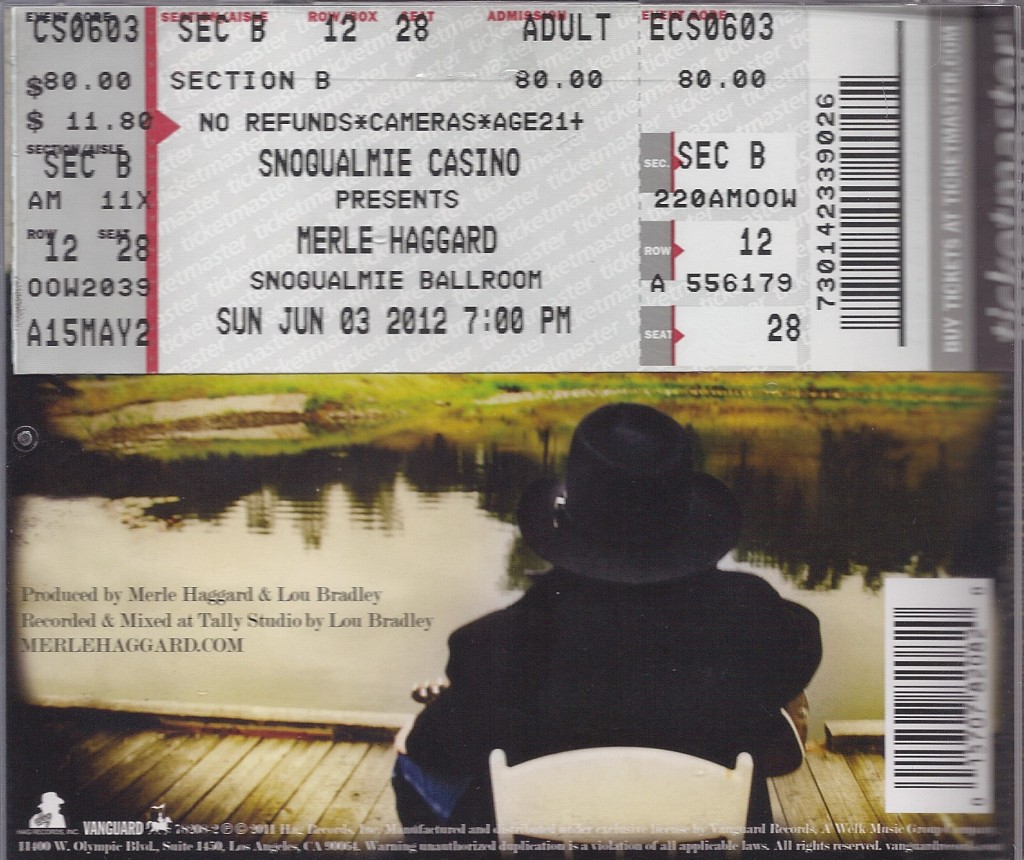 I have one word for today! That is MERLE! Yes the country legend is playing in Tacoma @ The Emerald Queen Casino @ 8:30pm. For 3 Decades now Merle has been my al time favouritism country music performer! This will be at least My 8th time to see Him, but feels more like 9! I did research it though! By far the best show was in Shelton @ The Casino with Kris Kristofferson, but He Never disappoints. Go Merle! I am ready to enjoy another night of killer tunes!10-28-1998 @ Tacoma Dome Fire-fighters Fund raiser03-08-2005 @ The Paramount Seattle (Blew away Dylan, the Head-Liner)02-11-2008 @ Paramount Seattle (Niko opened the show)04-03-2009 @ Paramount Seattle (Acoustic show co-headlining Kristofferson)04-30-2010 @ Emerald Queen Casino (Son opened with another Country band)09-24-2011 @ Shelton’s Lucky Eagle Casino (Full show w/ Kris Kristofferson) BEST!06-03-2012 @ Snoqualmie Casino (Son Merle Lee Haggard Opener)04-04-2013 @ Emerald Queen Casino (Youngest Son Opens the show) 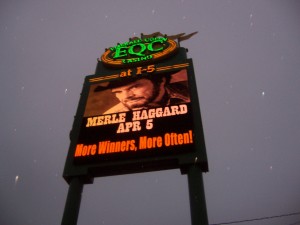 The actual ticket from the actual show! Very cool. Even Elvis digs it! 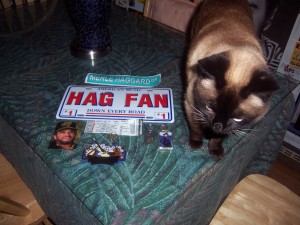