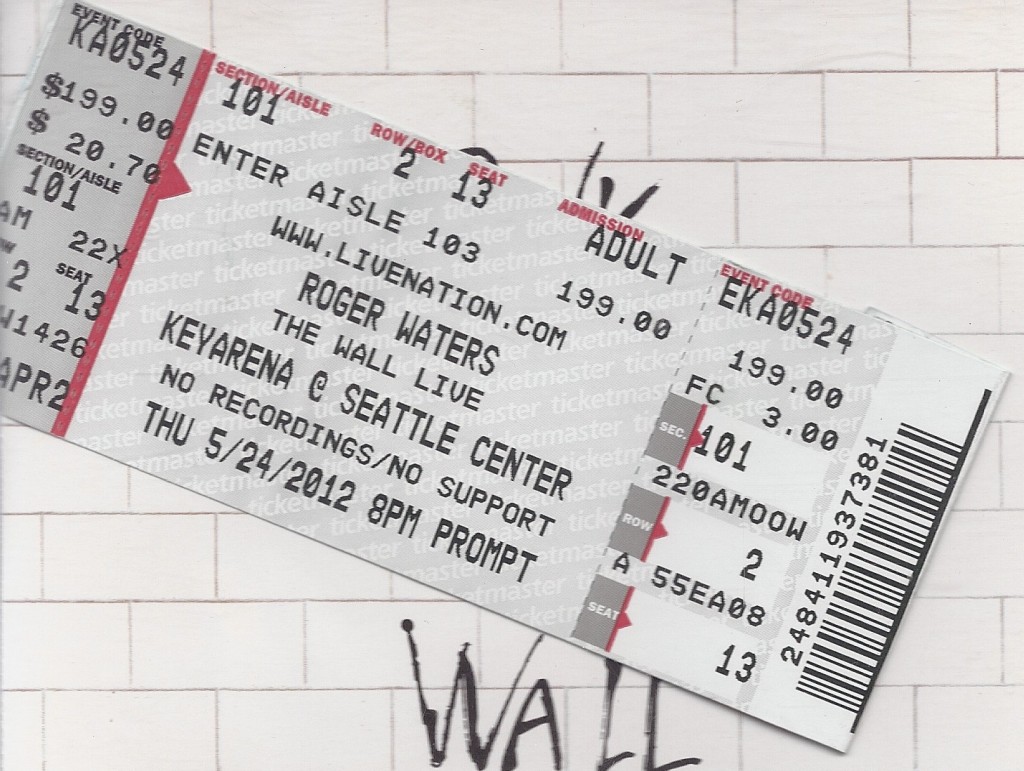 (The actual ticket from the actual show of course)!

Rodger Waters brought his amazing “The Wall Reconstructed Tour” to the Key Arena is Seattle WA. on 05-24-2012. This was one of the best Rock and Roll Theater Spectacles I have seen in a long time! Seriously!

(I left for the show with my ticket, phone, and a lunch that included some “Chicken Florentine”)

I left @ 5:25, and it ended up being a mistake. (Note to self. Leave at 4pm next time)!  I was on traffic literally for 2 full hours. From Olympia to Seattle.  I made 2 more mistakes. Coming in by the EMP Rock Museum there was an empty lot for a $5 fee but  wanted to check our normal spot just off “Denny Way”.  I got there and there is a new sign that says “No Parking” to the corner where we usually park. So I kept driving making my way through the back streets we usually walk. I passed another lot I should have stopped at for $7. But time was ticking away. It was already 7:20 I had been on the road for just about 2 hours. So right there where they park all the buses and stuff I ended up parking in a garage and paying $20! I was out of time and frustrated that I had not taken that first stall for $5. But this was just mere blocks from the venue, Right around and the corner. I had no choice if I was to be on time. 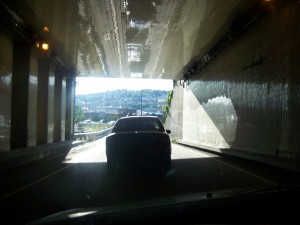 No time for cocktails. I basically went in and went to my seat. But it was a GREAT SEAT! So much better than Tacoma. It was actually better and closer than Rene and Carol’s, who were also at this show, but they were strait on behind the sound board where is where I wanted to be. I had to turn my neck all night, When the pig came floating by I was only abut 20 feet away from it! This particular performance of “The Wall” was really tweaked, and rehearsed. 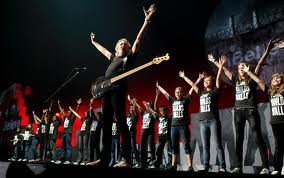 (Early in the show Rodger is joined by a local choir)!

The lead guitarist was G.E. Smith who played with Hall and Oates in the 80′s and was the Band Leader on Saturday Night live for many years. He is awesome at that. And this show had so many visuals and theatrical triumphs. It was absolutely stunning. And the sound was just perfect! You could actually feel the thunder of the helicopters and the stereophonic surround sound of the bullets in the machine guns. Totally cool! 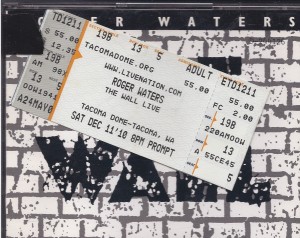 I was lucky enough to have seen this show already on 12-11-2010. The show had totally evolved and gotten way better! My seats were better, as reflected by the price, but Rodger had tweaked this show to perfection. This performance was substantially better sounding and visually uplifting. It just worked perfect in every aspect! His band was amazing as well! Consisting of  Dave Kilminster (guitar), GE Smith (guitar, bass), Jon Carin (keyboards), Harry Waters (Hammond organ), Graham Broad (drums), Robbie Wyckoff (vocals), Jon Joyce, Pat Lennon, Mark Lennon, and Kipp Lennon. They were tight and right on the money! 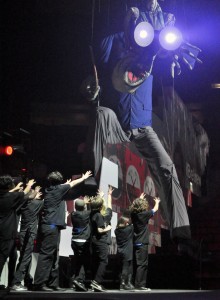 (A shot of the show in Portland just a few days before the Seattle show)!

The Wall album is played in its entirety, as well as two songs not in the original release—”What Shall We Do Now?” and “The Last Few Bricks“[26]—both of which were also played at every concert during The Wall Tour in 1980–1981, and documented on the album Is There Anybody Out There? The Wall Live 1980–81, released in 2000. “One of My Turns“, “Don’t Leave Me Now” and “Run Like Hell” are all transposed one key down to accommodate Waters’ vocal range. 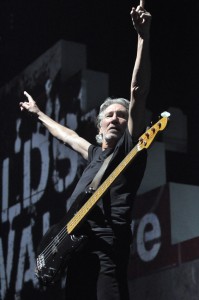 (A shot of the show in Portland just a few days before the Seattle show)!

During the show the road crew literally builds an entire wall right before your eyes. Pretty soon the band is totally blockaded from site and all you see it this huge projection. Rodger Waters stays in the limelight for all but 2 songs I would say. I was especially touched when He spoke about our Brutal Police state and the death of  Brazilian Jean Charles de Menezes who was shot in the head seven times at Stockwell Road Tube station in London. They also displayed photos of dead soldiers from  war conflicts during the ”The Thin Ice” and intermission. 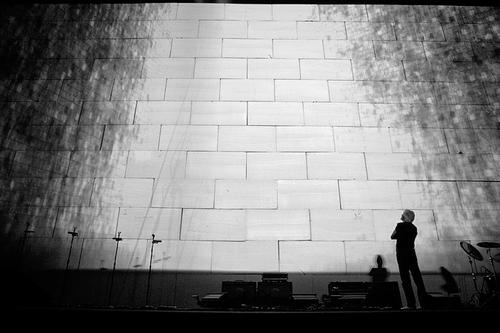 (What an amazing spectacle of a killer show this was)!

I sat next to a European Dude named Alex who is a web site designer. We made friends and even went for a beer together at the 25 minute intermission. But the line was too long and I had to skip it. After the show, My new friend Alex and I went to the souvenir shop together where I bought a key chain and a  button pack. I gave him my info and I hope He sends me and email.  Alex paid the same as I did for His ticket, and He got it early, so it seems that I paid the right price for this seat, which was a very good location for this killer show! 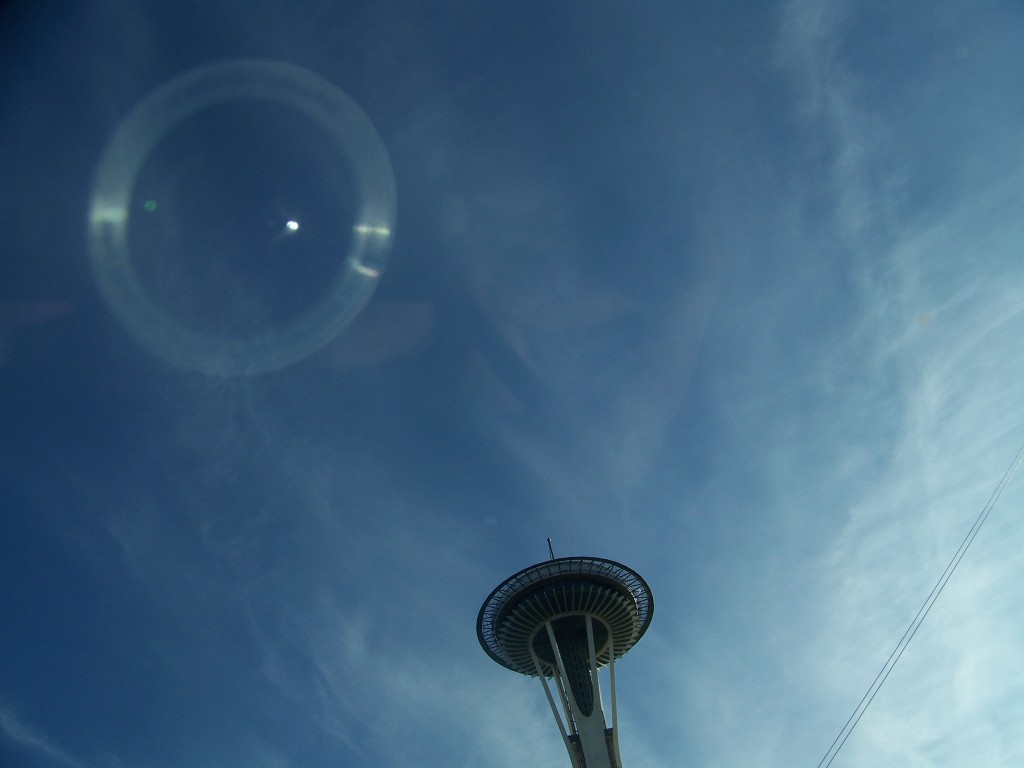 (Beautiful shot of the “Space Needle” as I was coming into town. Note the reflection of my camera lens on the left)!

After the concert, and the purchase of my souvenirs, I ended up going out the wrong door and was on the other side of the Arena. But this happened to Me once before and I remembered and was able simply walk around the huge building and find the trucks. I was parked just across the street from these trucks. It was an easy find. But I was unable to drive down to “Alaska Way” and had to go a mile the wrong way, and then finally turn around. There was train blasting by at the “Spaghetti Factory”, so I went down a few miles before I finally waited for the train. But when I got on the right road, I hot a detour sign. So I followed the detours and finally got to Seahawks and Mariners land. I got on the free-way where we always do. 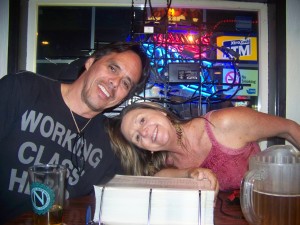 (Here we are, with  Rene and Carol after the show singing a Karaoke track from the concert “Another Brick in the wall”). That’s fitting!

I ended up meeting up with Rene and Carol at The Viking Lounge in Lacey WA.  for an after show rendezvous!  I am happy to say they never waited on me there so I spent no money! I also got to sing “Another Brick in The Wall” appropriately, with bragging rights, since I had just come from this Monumental show I might add! So that was fun. I spent only $40 on the trip for parking and buttons, plus gas I guess. But I get 33 MPG so that was kind of minimal maybe? Especially for such a mind blowing and amazing experience that I will never forget!

(These are the souvenirs I bought @ The show) 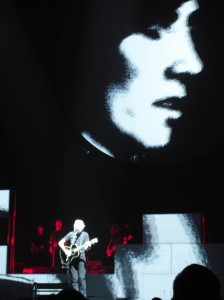 (When Rodger sings “Mother” early in the show they project video from Him singing it @ Earl’s Court in London 1980. Synced up!)

So that’s the poop. The show was BRILLIANT! I think Anyone would have loved it! In fact I will place it in the top 5 shows off all time that I have attended. Up there with Paul McCartney 2005, Simon and Garfunkle Reunion in 2003, Neil Young Unplugged “Silver and Gold Tour” in 1999, and of course the Rodger Waters “Dark Side of the Moon” Tour in 2008. And I have seen hundreds of great shows, so this means a lot for Me to make such a statement!  It was just too good to describe! Live is Best! For sure. This was a sweet Birthday gift! 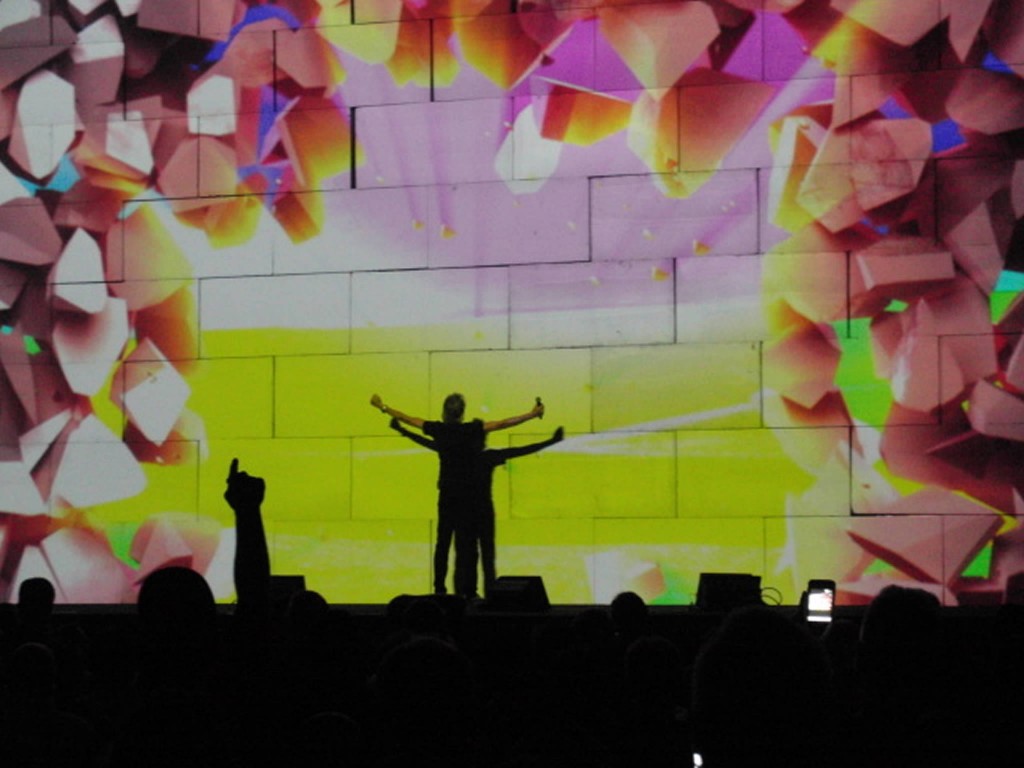 (This was a visually stunning part in the show)! Wow! 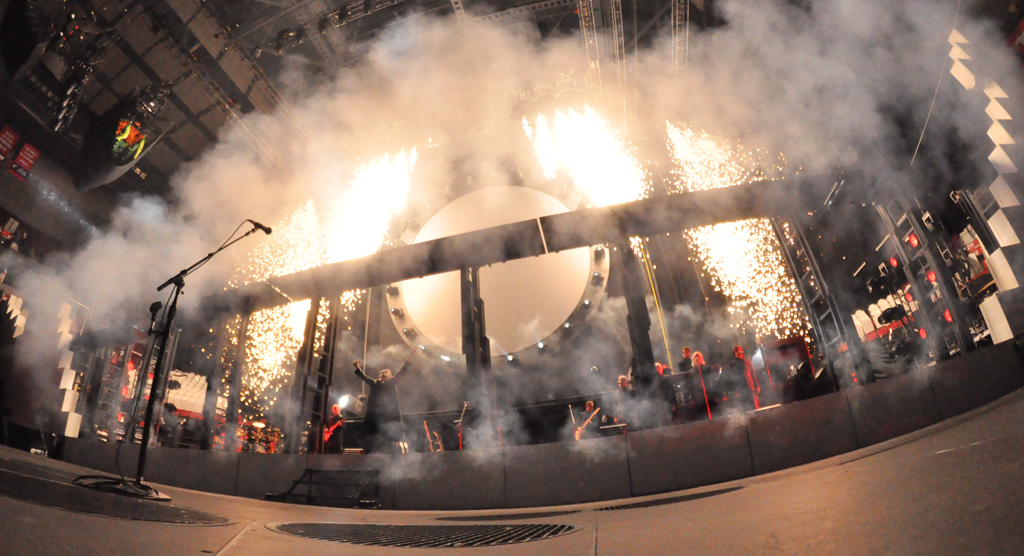 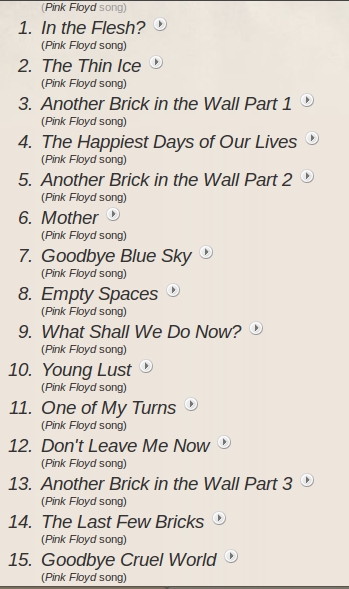 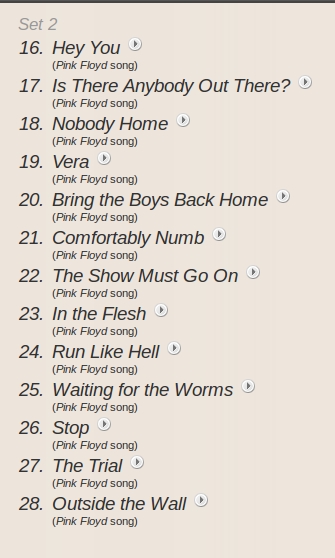