(Yes, of course this is My actual ticket! I save Everything!)

Paul McCartney World Tour:  NOVEMBER 03, 2005. Thursday in Seattle at the Key Arena. (In attendance were Eric Turnbow and The Late Great Romain Helke)!

SET LIST:
8:25pm:  20 minute DJ Disco Paul Mix. This set was very
clever with a DJ man playing a Re-mix of some
McCartney Classics, disco style. The graphics
on the screen were psychedelic with strobes and
colour. Quite inventive. I want that CD!
8:55pm:  10 minute movie narrated by Sir Paul. Good.
8:45pm:  Opener:  Magical Mystery Tour (Paul on Hofner)
Flaming Pie (Paul pauses do “drink it all in”)
Jet
I’ll Get You in the end (Paul set this song up
by saying “If you remember this song then
you were not there).
Drive my car (Sang at Super bowl)
Till There was you (Ancient cabaret style)
Let Me Roll It (2 minute Hendrix jam at end
to Foxy Lady with Paul on his Les Paul)
Got to get you into my life
Fine Line (Paul on piano. Title Song from new cd. Paul mentions he fell
into the piano pit on the 2nd night)
Maybe I’m Amazed (Classic live wings!)

Long and Winding Road (An Eric Favourite)
Solo Guitar: The Living room set:
In Spite of all the Pain (1958 acetate with the  guys splitting the record fee!    The member kept it 23 years instead of sharing it. He was to keep it for one
week. This track is featured on Beatles Anthology)
Jenny Wren (New cd. in the style
“Blackbird”.
For No One(Paul on the piano with band)
Fixin’ a Hole
English Tea (New cd, “Chaos and Creation)
in the back yard”. Paul loves his
cup of tea.
Follow Me (New cd. Paul dedicated this
to his wife Heather and their 2
year old daughter, Beatrice!)
I’ll follow the sun (Old Beatle shocker)
Bach Classical Guitar Piece (Acoustic)
Blackbird (Paul explains he wrote this song adapted the Bach Piece)
Eleanor Rigby
Too Many People (This was a huge highlight from the first solo                                                   Paul  on Hofner Bass. Unexpected song)
She came in through the bathroom window
Good Day Sunshine (Paul explains they woke up the space shuttle with this track. Shows pictures of the shuttle)
Band On The Run
Penny Lane
I Got a Feeling! (Another unexpected
highlight! One of my favourites )
Back in the USSR
Hey Jude ( This required a lot of Crowd
participation. Paul directing)
10:55pm       Live and let Die (Last official song.
special effects and fire and bangs
11:00p         FIRST ENCORE: “Yesterday” Paul plays the Epiphone guitar he used on Ed Sullivan”.
11:05pm      SECOND ENCORE: “Get Back”
11:10pm      THIRD ENCORE:  “Helter Skelter” (This
was a highlight! Rockin’!)
11:16pm      FOURTH ENCORE: “Please please me”
Sound & unexpected. Short and very sweet. Paul came out flying a large American flag.)
11:20pm      FIFTH ENCORE: “Let It Be” Good one. with a Special painted piano!
11:25           SIXTH ENCORE: “Sargent Peppers Reprise” This was the perfect ending “We’re sorry but it’s time to go”
FINAL ENCORE: “The end”. 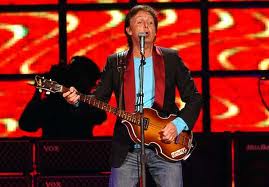 This show was a whopping 2 hours and 40 minutes with another 35 minutes of “Opening agenda”. It was by far the best show I have seen by him, and I have caught 4 other tours, 1976Wings in the King dome, 1990 “Flowers in the dirt” Tour in the King dome, The “Driving Rain” Tour in 2002 at the Tacoma Dome, and the “USA Tour 2005″ to promote the new cd “Chaos and Creation in the back Yard). I’m telling you, I was a kid in a candy store and I thought I had died and gone to heaven! Out of some 38 songs, 24 of them were Beatles. He really looked and sounded great. Not a 63 year old at all in the least. He was pumped up and in full spirits. I give this show the HIGHEST RATING I possibly could. He pulled out all the stops. My thumb is way, way up! You Go Paul! I will definitely try to go see him again live if there is another tour in the future. He is also, contrary to popular belief, very HUMBLE! I kid you not.What a sense of humour as well. He is welcome for dinner at my house any time!  He is a strict veggie you know. But oh can he ever write songs! That is his best gift! Sir Paul? You better believe it! He ROCKS!

This photo was actually taken in Seattle that very day! Very cool!

It couldn’t have been a 63-year-old man. Paul McCartney looked remarkably young — especially following the wrinkly Stones, who played the same place Sunday — and sounded much the same as he did in the Beatles, many years ago. He fit right in with the four young guys in his band (the hair dye helped), and had even more energy.

Compared to the Stones show, which featured whiz-bang effects, including a stage that floated across the room, McCartney’s performance emphasized music. The staging was impressive, especially the massive, busy lighting effects and creative use of video screens, including giant ones behind the stage.

The bright lights often shone into the audience, which seemed to unite McCartney with the fans. “Let me drink this in,” he said, his eyes sweeping the whole packed hall.

The generous, 36-song set included 24 Beatles songs, highlights of Wings’ career and cuts from his solo albums, including four from the new “Chaos and Creation in the Backyard.

He saluted the other Beatles, which got a standing ovation. The set featured the first song they ever recorded, “In Spite of All the Danger.” Perhaps as a
tribute to Seattle’s own Jimi Hendrix, McCartney, on guitar rather than his usual bass, added a bit of “Foxy Lady” to Wings’ “Let Me Roll It.”

Thursday night, KeyArena, Seattle The show opened with a DJ spinning deconstructed, remixed McCartney songs for 20 minutes, followed by an excellent 11-minute film on McCartney’s life and career, with his own
narration.

McCartney and his four-piece band opened with “Magical Mystery Tour,” as the entire crowd leaped to its feet.

He followed with the weird, obscure “Flaming Pie,” the propulsive “Jet,” a sweet “I’ll Get You” and a song McCartney noted he played at the Super Bowl in February, “Drive My Car,” with speeding race cars on the big screens.

“Hello, Sea-at-le,” McCartney said, promising a long night of music. “We have come to rock you and rock you we will!”

Among songs that energized the big, multi-generational crowd — the two kids in front of me in $250 seats, who couldn’t have been older than 12, were ecstatic — were “Maybe I’m Amazed,” “Fixing a Hole,” “Good Day
Sunshine,” “Band on the Run” and “Back In TheU.S.S.R.”

The main set concluded with the big production number, the bombastic — literally, with booming pyro — “Live and Let Die.”

The two encores consisted of high-energy Beatles songs. The first opened with his masterpiece, “Yesterday,” and rocked with “Get Back” and “Helter
Skelter.”

The second opened with the early Beatles’ “Please Please Me,” followed by the wise “Let It Be,” and ended with “Sgt. Pepper’s Lonely Hearts Club Band” and “The End.”

By GENE STOUT SEATTLE POST-INTELLIGENCER
It took him nearly 40 years to do it, but it was entirely worth the wait.

Paul McCartney, still slender and gorgeous at 63, returned to the former Seattle Center Coliseum, now Key Arena, for the first time since the Beatles’ hysteria-inducing performances of the mid-1960s.

With a four-member band led by keyboardist Paul “Wix” Wickens and featuring lead guitarist Rusty Anderson, McCartney led a capacity crowd — mature, but no less enthusiastic than the screaming hordes of the ’60s –
on a celebratory journey through his musical past, from the Beatles and Wings to songs from his new solo album, “Chaos and Creation in the Back Yard.”

Scheduled to start at 8 p.m., the concert was delayed by at least 30 minutes and began with a pre-show DJ and 10-minute film on McCartney’s life and career,from the bombing of London during World War II to therecent Live 8 concerts. Dressed in black trousers, turquoise shirt and black sport jacket, McCartney launched the show with a boisterous “Magical Mystery Tour,” the first of more than a dozen classic Beatles songs. McCartney stuck to the 36-song set list featured at other recent shows.

The show featured several songs at the piano and a three-song acoustic set that began with the ’50s-sounding “In Spite of All the Danger,” the first recording made by McCartney, John Lennon and George Harrison in their pre-Beatles days. Among the best songs from his new solo album was the somber, sentimental “Jenny Wren,” which closed the short solo set.

Wielding his trademark bass, Paul McCartney performs at the KeyArena on Thursday night. The ex-Beatle got the concert started with “Magical Mystery Tour” and went on through an array of his hits, both with the Fab Four and after, with some new songs sprinkled in.View a gallery of concert photos.
McCartney played a vintage Hofner bass guitar, an instrument featured on a number of older songs. For his solo song “Flaming Pie,” six light clusters above the stage appeared like space-age chandeliers. Above the stage was a giant LED screen showing close-ups of the band.

“We have come for many miles to rock you tonight –and we will.”

“Drive My Car” was accompanied by vintage films of1950s dream cars. McCartney introduced the sentimental “Till There Was You” as a “smooching song” from the Beatles’ cabaret days. The song was accompanied by a backdrop of clouds and blue sky. “Let Me Roll It” featured a snippet of Jimi Hendrix’s “Foxy Lady.”

For “Fine Line,” the first song from his current solo album, a piano rose from the stage floor, and McCartney joked about falling into the hole on the
second night of the tour. Anderson induced the new song by tossing a fortune cookie into the crowd, then reading the fortune aloud: “Now is the time to try something new.”

Another charming song from his current solo album wasthe delicate, sentimental “English Tea,” accompanied by an animated English garden scene complete with oversize butterflies. The song featured the entire band, except Anderson, who returned for the Beatles song “I’ll Follow the Sun.”

“Blackbird,” “Eleanor Rigby” and “Good Day Sunshine” were highlights of the show’s second hour. McCartney proudly mentioned that “Sunshine” had been used last summer to awaken NASA space shuttle astronauts. The beautiful “Blackbird,” he explained, was adapted from a J.S. Bach piece.

Pyrotechnics were featured on “Live and Let Die,” which preceded the first encore of “Yesterday,” “Get Back” and “Helter Skelter.”

The second encore began with “Please Please Me,” continued with “Let It Be” (played on psychedelic-themed upright piano topped by a candle) and ended with a guitar-heavy version “Sgt. Pepper’s Lonely Hearts Club Band.”