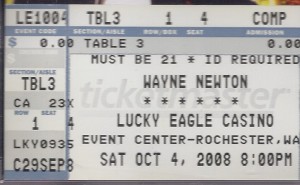 (Yup, this is the actual Ticket from the show in Rochester)!

I must say I was pleasantly surprised with the Wayne Newton concert at the casino in Rochester Saturday, October, 4th, 2008. 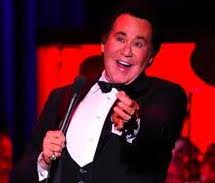 We entered the venue, and I was surprised that over the loudspeakers they were playing his old teen age music from before his voice had changed. He actually sounded more like a female in those days, but later went through puberty and got his masculine velvet voice that we all know and love today. This was the first time I heard the actual artist of the night featured before the concert. The music was very jazzy and seemed to hold up well after some 4 decades since it was recorded! I had low expectations, but was frankly blown away by his show! Believe it. 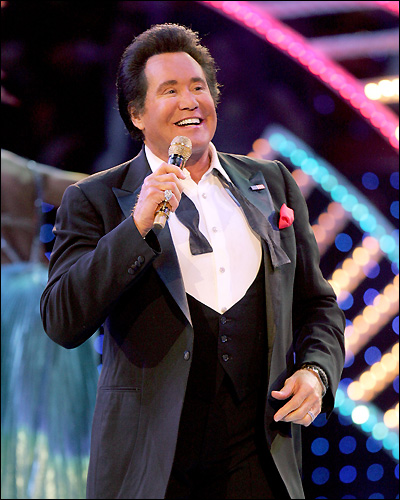 He was very pro, slick, funny, diversified. He even played a full 2 hours. it was awesome sound and he was on target. He does mostly cover tunes of Elvis an d Bobby Darin, but delivers with an all pro slick and sophisticated style. A Las Vegas show in Rochester Washington! Fantastic. Who needs to fly to Vegas? 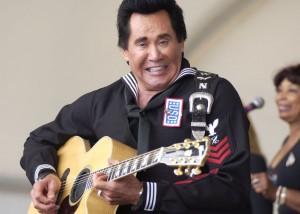 He actually opened with the classic Elvis Presley show fro the 70′s of theme from the movie 2001, followed by CC Rider. He had a diverse mix of music and humour that was astonishingly good. Who would have guessed that he is a staunch Republican? No me!

I was most impressed with his amazing musicianship. He did have an 18 piece astounding orchestra with great female singers, horn players and the works.  At one point he played piano, lead guitar, acoustic guitar. banjo, and the best of all was his fiddle playing. His jokes were reminiscent of Johnny Carson. He was the consummate pro… all the way. Thumbs way up! Mimi and paid $55 a ticket for this event, and it was well worth it. Plenty of cocktails, and also a great dance at the Red Barn afterwards on the way back! 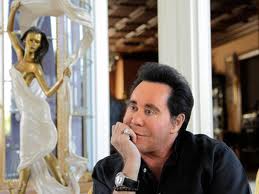 I picked up a key chain, button, and cd at the souvenir shop. We had a great time. This show was way better than Al Green, Chuck Berry, and other recent fandangos. Really good! The people were very old though! I guess Wayne is 66 now, and the audience seemed to be about the same age as him!  But We  were about the youngest people there! No really!!

So now lets hear from our friend in Las Vegas and what He thinks of Wayne Newton performing live!

Wayne Newton A Concert Review July 29, 2001
The Wayne Newton Theater Las Vegas, NV
A Review by “The Dude on the Right”

As the three of us took our seats I kind of wondered what to expect. Really, other than “Donke Schoen” and seeing him in “Vegas Vacation” I wasn’t familiar with the stylings of Wayne. I surveyed the crowd noticing that the three of us were, well, some of the youngest people in the crowd, and then the announcer came on to introduce Wayne.

Entering dressed in a spacesuit and walking down a rainbow colored ramp, Wayne greeted the audience, the band rose up from under the stage, and Wayne kicked into a couple of Elvis tunes, “Norfolk VA” and “Suspicious Minds.” It was during “Suspicious Minds” that I truly realized Wayne Newton has one of the greatest gigs in existence. Why you ask? Because at the end of “Suspicious Minds” Wayne started to work through the crowd. Women all wanted to kiss him, dudes tried to shake his hand, and Wayne obliged just about everyone (even I got to shake his hand). But singing wasn’t all this show was about, nope, Wayne had the joke machine rolling as well. Introducing his piano player and conductor, Greg Macaluso, Wayne went to grab his handkerchief from his jacket pocket only to find a pair of ladies underwear. Wayne seemed shocked, asked whose underwear they were, and although Greg seemed stymied, all of a sudden Stu’s dudette screamed out that they were hers. The joke was funny even without Stu’s dudette blurting out, but now I wondered if Stu knew about his dudette and the piano player. 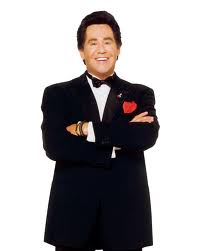 As the show continued it was a seeming endless mix of joking and singing with Wayne spanning lots of different musical stylings. You had your “You’ve Lost That Loving Feeling” and “Help Me Make It Through the Night.” You also had Wayne paying tribute to Hank Williams with “I’m So Lonesome I Could Cry” and of course “Donke Schoen.” And although Wayne’s voice wavered quite a bit, he still knew how to work his fans to having a great time, a lot of time by just utilizing his band and back-up singers, especially Jeff Brandt who does some killer imitations of Tom Jones and Willie Nelson and is pretty good in his own right at making jokes. 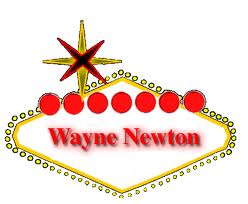 Wayne’s show was everything I expected and then some, and by the then some I didn’t know Wayne was so talented as a musician. He kicked butt on a piano solo, impressed me with his guitar prowess, even wailed on a fiddle and played some banjo. And who thought all he could do was sing?

(This is the cd I bought at The Show!)